Going for a dive and seeing humpback whales is pretty magical just by itself. Even more magical is the occasion where a baby whale decides to ditch its mom and come towards your direction out of curiosity. Unbelievable right?

Well this is exactly what happened to one diver and luckily the whole thing was caught on camera. I mean it is 2018 so that isn’t that surprising. The camera thing I mean of course.

Eamon Porter, and Australian photographer filmed the whole scenery from a drone as two divers kept a safe distance from a whale and its baby. The mother was apparently taking a snooze, whereas the baby was constantly swimming around the mom. Soon however, it grew bored so it decided to explore the beings nearby. 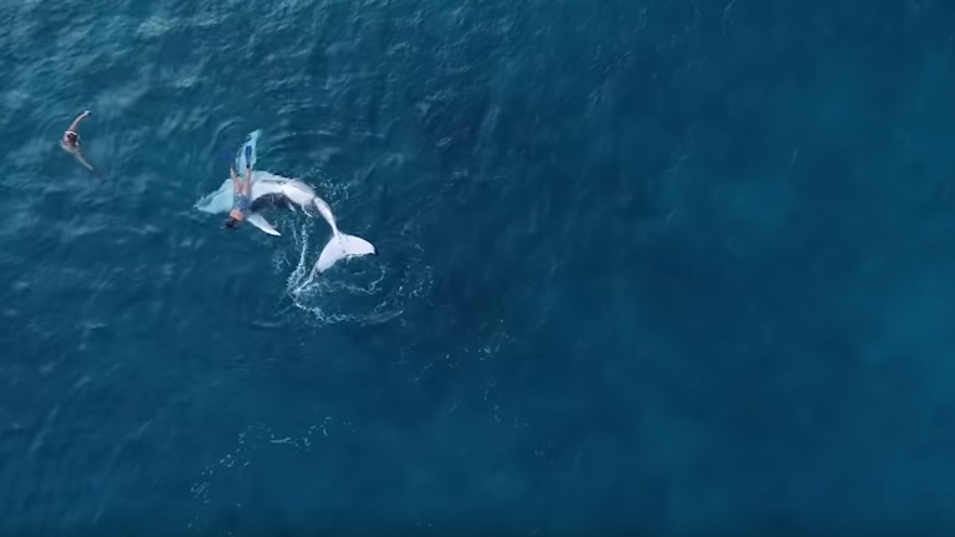 The whale first approached one of the women from underwater, scooping her onto its belly with its pectoral fin. The pair laid back to back for a while. Then using its tail to push itself forward, it departed from the woman and swam back toward the mom.

Porter said that this is a prime example of nature interacting with humans and not the other way around. He added that he had no idea whether the mom knew that there were humans around, but it clearly trusted the baby enough to let her go.

Of course, things could go much worse if the baby had instead decided to flap its tail in the diver’s direction, especially given that it could weigh up to 50 tons. Luckily in that moment however, the sight was very serene.

Recently, a boat of tourists in Australia were also surprised in a similar way by humpback whales. John Goodridge, a wildlife photographer happened to be in the boat at the time and claimed that it was an amazing sight to see up close. He added that the whales were really playful and that they got lucky to see them as people can be out in the water for days and never come across any.

Ah but that is so unfair! I really do want to see one up close now. They look amazing.