Home Animals Cat tries to comfort orphaned kitten and even tries to teach him...

Moonglade Rose, an animal rescuer found a distressed kitten this past October. After a trip to the ER, the kitten was brought back, looked healthy, but she was all shaken up from the whole ordeal.

Moonglade came home that day with the rescue kitten, who she named Opie, but she wasn’t quite sure how Andy, her other rescue cat would react. As soon as Andy heard the little one meow however, he came running.

The tabby boy wrapped his paws around Opie and even started to groom him, perhaps as a welcome-home sign. Moonglade said that Andy was very welcoming to Opie from the start and wouldn’t stop showering him with kisses.

The two completely bonded and it was clear Andy loved this little guy.

Similar to Opie, Andy was also rescued from death at a nearby gas station.

Moonglade said that Opie seems to love her and fall asleep next to her. He is so small, she claims, that he can fit in the palm of her hand. How cute!

In the first few weeks, Moonglade would get up at night and feed Opie who would then crawl back in bed with his mom. All the meanwhile, Andy would be right there in the kitchen, keeping everyone company.

Before Opie’s arrival, Andy would snuggle with his human mom. Ever since the new kitten arrived however, Andy can’t take his eyes off his brother, keeping him clean and groomed.

He even has taught Opie how to use the litter box, how to feed, how to play, and most importantly how to love and cuddle.

Moonglade said that she was too adopted and something was always missing from her life, that is until she met Andy. Now, Moonglade says, it seems like Opie is doing the same to Andy.  Good deeds come around, looks like!

It has now been six weeks since Opie joined the family, and Andy couldn’t be happier. He still shows the same level of enthusiasm as that first day. 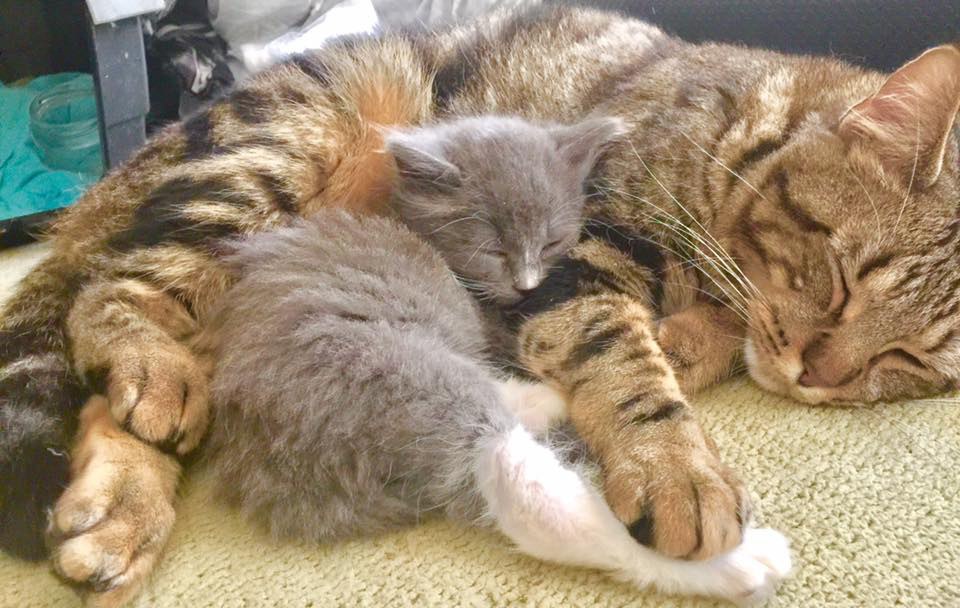