Home Animals Cute dog proves himself a hero as he sniffs a helpless kitten...

Jai and owner Rose Jenkins were just done walking for the day and decided to head back to their condo. As they turned into an alley and were almost home, Jai pulled on his leash suddenly and came to a halt. Jenkins, who lives in Bangkok, Thailand said that at first she thought her dog stopped as he had smelled food. Suddenly however, she realized that this wasn’t the case. He was jumpy and startles, she claims, and she didn’t know whether to attribute this behavior to a rat or what. 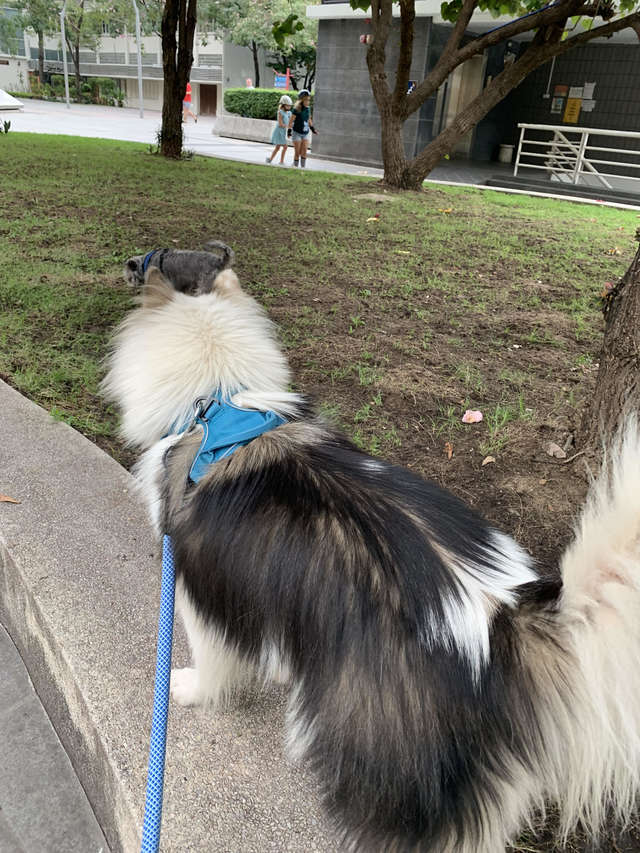 Jenkins then spotted a tiny black and white kitten that was hiding near some old pipes in the walls of a hotel. He perhaps startled the poor creature as he ran straight to her. Jenkins said that the kitten stood there stunned, as if he was confused or perhaps even lost. She added that it didn’t take her long to notice how malnourished and bony the kitten looked. 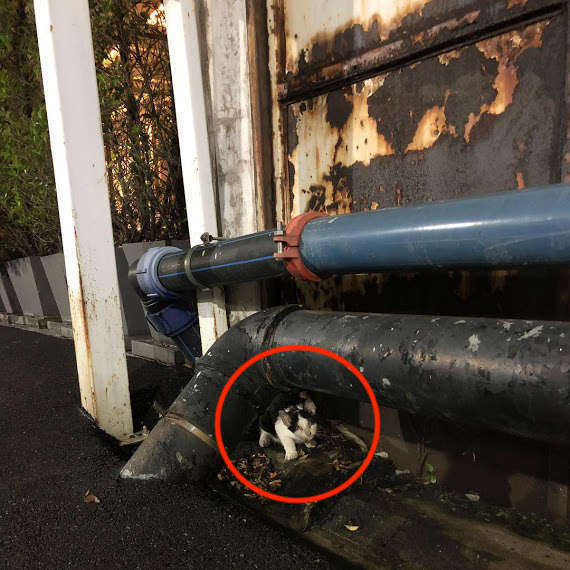 Jai wouldn’t stand still either and his owner struggled against holding him on a leash. It was pretty clear however that Jay meant no harm. 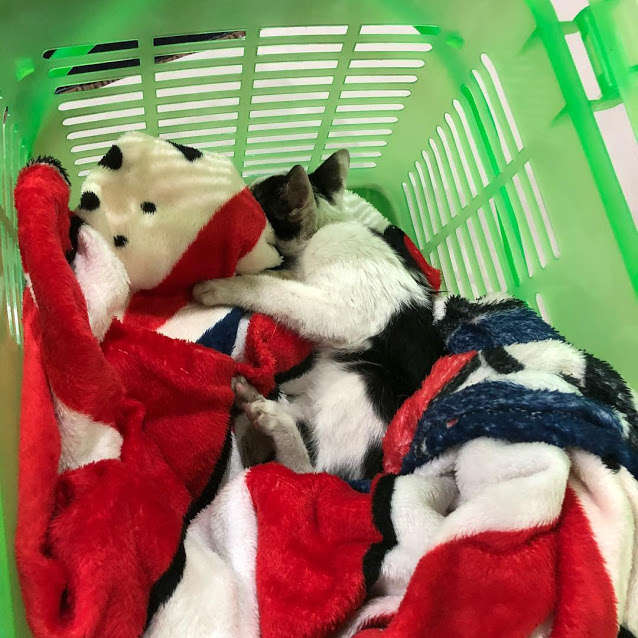 Jenkins confirms this as she adds that Jay loves kittens. She added that once when they had rescued a litter of kittens, Jai had been their foster mommy until all of the kittens were adopted. Jenkins however adds that she didn’t want the kitten to be startled so she took Jai upstairs prior to getting back to help her. She just hoped when she came back, the kitten would still be there. Going downstairs, she yelled to her husband to bring her a cat crate and a blanket. He was startled at first saying “Oh no, what did you find now?”, to which Jenkins replied that it wasn’t her but Jai who had made the discovery. 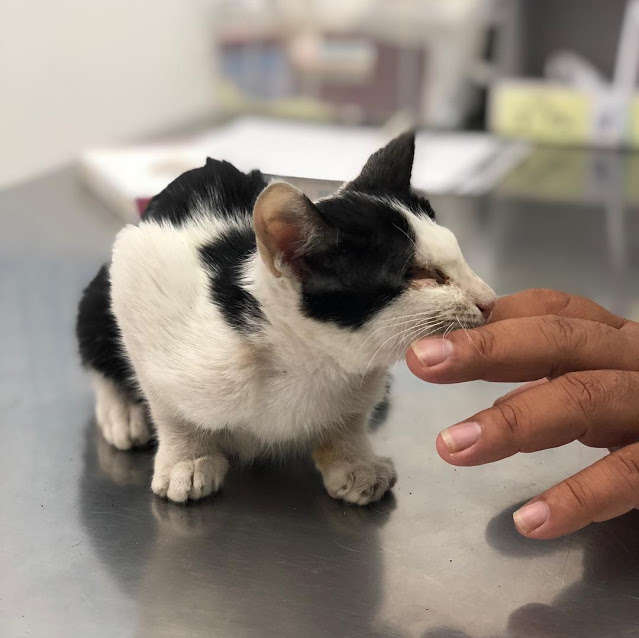 When Jenkins came back she found the kitten right where she had left him. She was terrified to see however that when he looked up at her, he had no eyes!

In addition, the kitten appeared to be terrified and Jenkins could see his ribs moving, indicating that he was breathing super-fast.

Before he decided to flee, Jenkins threw a blanket at him, put him on the crate and carried the kitten upstairs on the condo. 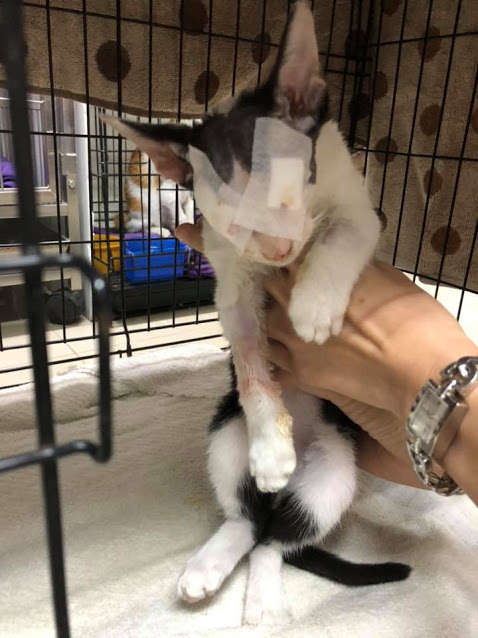 The kitten however appeared to be really sick as he was covered in fleas, his eye sockets were infected badly and he smelled terribly. So a vet’s attention was required immediately.

She tried to take a taxi at first but the driver refused to let her and the cat in his cab so she decided to take the subway instead, even though aware that there were no animals allowed on the subway.

She said that she had the kitten in the backpack and managed to sneak through security guards on the train, hoping that the kitten wouldn’t let out a cry during the 10 minute subway ride. 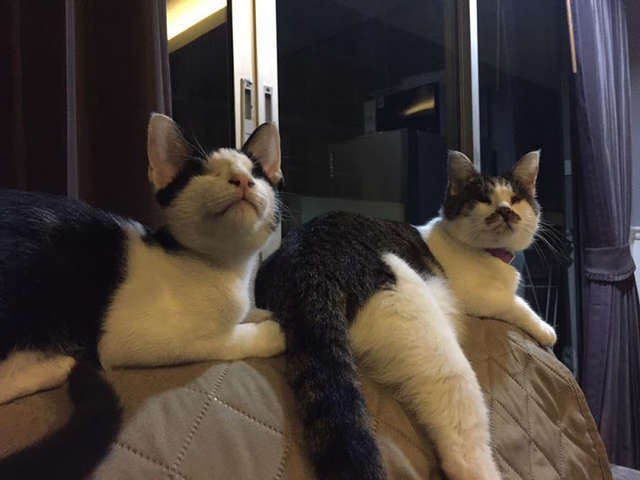 She made it to the vet’s office ten minutes before it closed, but the staff, seeing the severity of the situation, decided to take the kitten in and treat him. Jenkins adds that all the vets came to that room to look at Aldous (the cat’s name now) and they couldn’t believe their eyes how a blind cat managed to survive this long.

The vets gave him IV fluids, flea treatment, and began cleaning out his eyes. The vets waited for three more days to perform surgery on him as he was too weak to go through with it then. Jenkins adds that Aldous remained calm throughout the whole treatment process. On the fourth day, the vets put Aldous under sedation, cleaned his eye sockets, removed the tear duct, and sew the eye sockets closed.

Jenkins ended up visiting Aldous every day at the vet and the same time she tried to figure out what the best way for Aldous to feel safe would be. She wanted to adopt him, but she had several dogs in her home, including Jai and so she didn’t think the cat would feel safe there.

So instead, she reached out to PAWS Bangkok, a local rescue group. They agreed to pay for some of Aldous’ medical treatments and were willing to help out in finding out the perfect family for the little one.

Jenkins said that though many families were interested and kept up with Aldous’ story, one family stood out. Ethan and his girlfriend claimed that they had a blind female cat already and would love for her to have a companion. They also added that they knew exactly how to take care of a blind kitten and would be really happy to give Aldous a new home. They adopted Aldous and even followed up with pictures from then one. From the first day, his sister took him under her care and put him to sleep by cleaning and grooming him the whole time. Aldous decided to follow this role model of his, learning the process of “catting” in an inside environment.

Jenkins is really pleased at how things have turned out.

She adds that the sweetest part of it all is the fact that Jai had spotted the kitten just on time for him to be saved. She adds that she walks the same route every day but had not encountered Aldous before. She is so happy that he found a loving family because to survive alone in the dark, and especially in the condition that he was on, is a hard task indeed.

She lastly added that she is happy that now Aldous gets to live the life that he deserves, surrounded by a family that loves him and know exactly how to take care of him too.