Home Animals Dog will do anything for attention; even if this anything meant calling...

Remy and Bomber are two attention-loving puppies who will go to great lengths to receive some attention from their humans. 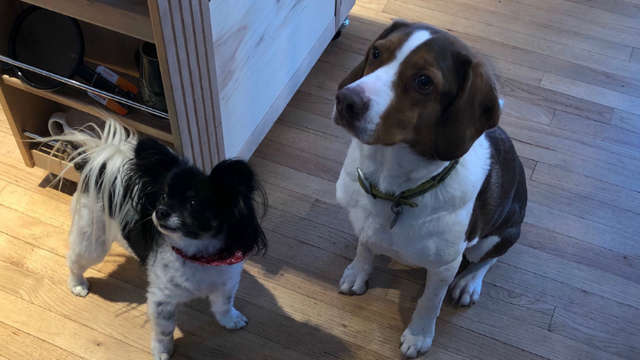 On a Thursday morning, the Lakeville Police Department in Minnesota woke up to a strange phone call. When the 911 dispatcher answered the phone, all he was getting from the other end of the line was silence.

The mystery from then on only deepened as the police had no idea who or what they were dealing with. Officers Michele Roberts and Emily Barres arrived at the location where the calls were placed from but the house looked seemingly empty. However, both officers knew that this was quite unlikely.

The officers said that by the time they got there, the department received three more 911 calls. All they could hear were dogs barking on the other end, but no human voices whatsoever.

Having walked around a property a little but failing to identify anything wrong, both officers left. Roberts however decided to return and attempt to make contact one more time. She found the cell phone number of the home owner and obtained the code for the garage. She claims to have gone to such length as she was scared that there is a stuck human in there who was stuck and couldn’t cry out for help. She claims to have never thought that the culprit were the dogs, that’s for sure.

Upon entering the house, a hound mix and a Papillon mix- the partners in crime- ran toward Roberts. They seemed a bit shamed about the trouble they had caused but were ultimately very pleased that they had gotten company.

Roberts claimed the dogs were super friendly and just demanded to be pet.

Roberts however wandered into the home to try and identify the device that the calls were made from. Sure enough, in one of the rooms she saw a forgotten cell phone that was on ‘emergency calls only’, so the dogs had gone through the trouble of hitting the screen with their nose and paw to dial 911.

Roberts theorized that most probably the 45-pound hound could have reached the phone if he jumped on the desk or reached forward standing on his hind legs.

The pups’ owner was equally baffled by the 911 calls.

Roberts said that at first he didn’t believe it had been the dogs until he had heard the recordings and you could clearly hear dogs barking in the background.

The homeowner even took the phone to AT&T to see whether there was anything wrong with the phone but as it turns out there wasn’t.

Roberts said that she is glad that this emergency turned into an accident of course. She claims that after 20 years on the force, having to deal with this comic situation was a first for her, but at the same time it provided some relief from everyday stress too, she claims.