Home Animals Puppy has the cutest cinnamon-roll ears out there; so cute she is...

When Jen Deane first heard of a litter of puppies in Georgia that needed rescuing, she knew that they were bound to be cute. However, she never thought they would be THIS cute.

Out of all the litter dogs whose ears were big and pointy- one of them differed. Cinnamon’s ears curled inward just like two cinnamon rolls, hence the name.

Deane, president of Pit Sisters said that she had never seen a dog with ears like Cinnamon’s. She claimed that all of her friends couldn’t believe how cute and  adorable Cinnamon is.

The rescue center even shared some of Cinnamon’s photos on its Facebook page and internet users, needless to say, immediately fell in love with them. Some users even claim that Cinnamon’s ears look like “victory rolls”, a hairstyle that was popular in the 40s. 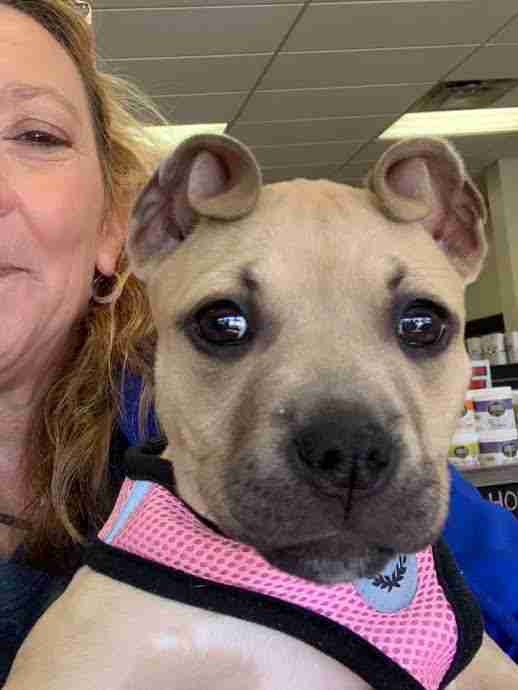 Her photo has been shared thousands of times and has earned a lot of attention for herself and her brothers&sisters who will be out for adoption pretty soon.

Even though Cinnamon’s life is quite good now and she even got some fame, things were rough for her in the beginning. Three weeks ago, she and her siblings ended up in the shelter with no parents in sight. Deane claimed that it is perhaps likely that the pups escaped from a neglectful owner. She bases this belief in the fact that each of the puppies were very skinny, dirty, and infected with worms.

Deane said that they had taken them straight to the vet and they were offered immediate health care.

All of the puppies (except two) in the upcoming weeks will be available for adoption. Cinnamon is already adopted by a loving family, and Deane has fallen in love with Cinnamon’s brother, Zeke and has decided to adopt him herself.

The litter is 8 weeks old now and are really energetic. Cinnamon especially, as if aware of her cute appearance is especially spunky, in a good way. She seems to know she is good looking and she owns it.