With today’s free and easy access to media, news channels are looking for creative ways of raising views. Standard English and monotone voice no longer sell! The race to get views is very much real. There is no point in over-exaggerating however; the cover will blow sooner or later.

Such is the case with Mike Seidel, a Weather Channel reporter who was reporting live from Hurricane Florence in North Carolina. 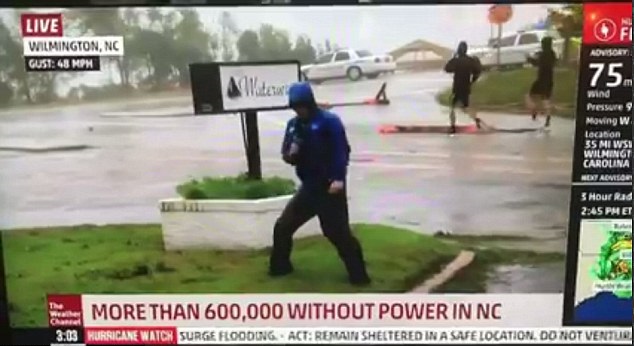 Shooting in Wilmington, Seidel shows up in a typical cagoule and weatherproof pants that seems to be standard attire for such extraordinary circumstances. While reporting live, he seems to be struggling against the hurricane, fighting it, as to not be whisked away in a matter of seconds. It was a very well set-up stage until it was ruined. Two men behind him are seen walking by undisturbed by the cataclysmic hurricane trying to eat them whole. They are in shorts too! They sure seemed to be dealing with it better than Mike Seidel for sure.

The moment was captured by a third-person who happened to cross by and witness the whole scene, and it was later posted on Twitter.  Ever since, it has been viewed more than 11 million times. The user captioned it

“So dramatic. Dude from weather channel bracing for his life, as 2 dudes just stroll past. #HurricaneFlorence”.

The Weather Channel reacted later on with a statement as to what appeared to be the case according to them.

I like the Weather Channel. But look at this guy acting like the wind is about to blow him over as he rocks back and forth. Meanwhile, I guess he missed the guys walking behind him casually talking on their phones. OOPS!!

It said “It’s important to note that the two individuals in the background are walking on concrete, and Mike Seidel is trying to maintain his footing on wet grass, after reporting on-air until 1:00 a.m. ET this morning and is undoubtedly exhausted”.

Sadly for the Weather Channel, the video also shows the two guys walking on grass for a while. Oops, perhaps we shouldn’t criticize Mike Seidel as much; maybe the other two guys were super strong.

Love in Hollywood can last and here are the proofs