We are pretty sure that this cat, named Rex Manning (we will refer to him as Rex from now on), thinks highly of his owner, Emily Crane- and yet he clearly still has love to share all over the place.

Crane learned of her cat’s friendliness in the most unexpected way.

Not that long after rescuing Rex as a kitten somewhat eight years ago, Crane learned that her cat has other people charmed as well. While some cats can be skittish near strangers, Rex was exactly the opposite and she would seek out affection from any human.

Crane said that Rex loves affection and petting especially when it comes with behind the ear scratches.

Even though Crane and her friends have tried to shower Rex with love, the latter seems to think that the world out there can offer him so much as well.

Crane adds that Rex loved going outside at a very young age, and Crane would let him out of the door and watch him from the upstairs kitchen window.

With time, Crane made sure to give Rex more and more freedom in exploring the neighborhood- a freedom that Rex took advantage of to the fullest. He would make acquaintances with almost everyone he got to meet, sometimes even getting to know new neighbors way ahead Crane. Crane adds that people in her neighborhood are just simply excited to see a friendly cat. 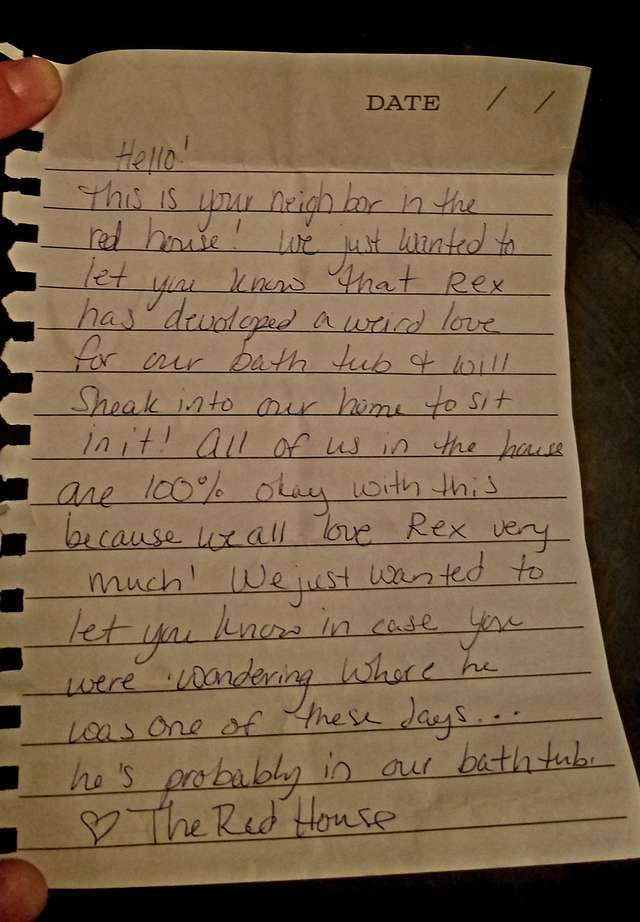 The other day however Crane learned that Rex is doing more than just paying visits to his neighbors.

In one of such adventures, Crane noticed something on Rex’s collar. Crane says that Rex made sure to prance inside the house confidently, as he had a delivery to make.

Indeed, Rex played the courier and delivered a note that was dedicated to him and his obsession with bathroom fixtures.

The note said the following: “Hello. This is your neighbor in the red house! We just wanted to let you know that Rex has developed a weird love for our bathtub + will sneak into our home to sit in it! All of us in the house are 100% okay with this because we all love Rex very much. We just want to let you know in case you were wondering where he was one of these days … he’s probably in our bathtub. <3 The Red House.”

Crane adds that she couldn’t stop laughing at the note and she found it simply adorable.

Crane has yet to meet the neighbors that sent the note, but she made sure to thank them for their hospitality via another note sent by the new courier, Rex.

Crane and Rex live in a close-knit community and given that Rex is pretty savvy, Crane doesn’t mind him going to other homes and exploring- being himself really.

Crane adds that she loves how friendly Rex is with people and how friendly and generous people are with giving Rex petting in return.